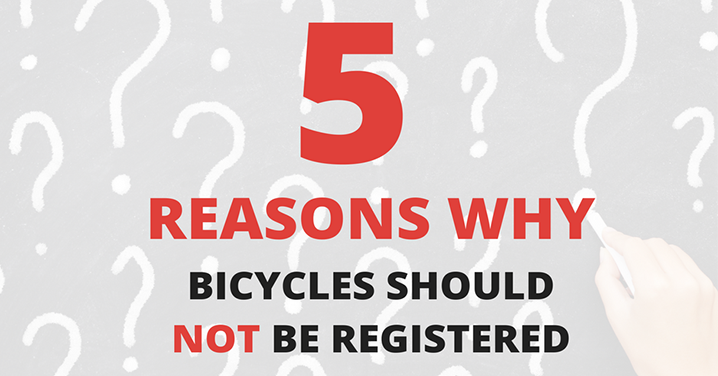 5 Reasons Why Bicycles Should Not Be Registered

Hopping on his bike for his ride home, Jeff had decided to head home a little earlier than usual on Thursday in an effort to beat the usual peak-hour traffic. Little did he know that this would sadly be his last, as a Sydney bus would strike him at a busy road crossing in Neutral Bay.

This horrific accident would result in the re-ignition of the age-old debate as to whether bicycles should be licensed, this time in parliament. This is not uncommon. Every time a news report to do with bicycles is published, the push for bicycle registrations begins – even when it is often not the cyclist at fault.

Various articles and studies published by regulatory bodies and road safety experts from all over the world conclude that bicycle registration is not an effective way to generate funding for roads or to increase road safety.

Here are the five reasons why bicycle registrations should not be registered:

Fun fact: Bicycles have existed for more than a century – longer than cars. Did you know that bicycle registration was debated in Australia in the 1930s, and knocked back?  Perhaps, motorists need to become more accommodating of their two-wheeled comrades.