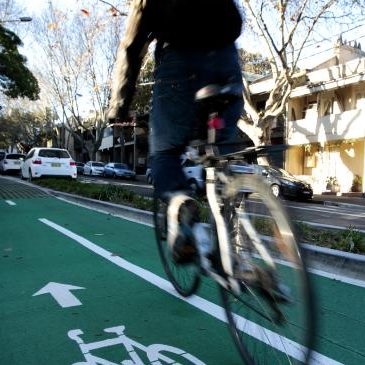 Unfortunately, unprotected bike routes and footpath cycling are the only options available to many Brisbane CBD workers – neither of which are attractive options to some cyclists during peak hour traffic.

Bicycle groups have identified the last 500 meters from established bikeways to work locations as the greatest problem areas and are campaigning for a safer alternative options.

Brisbane Central Business District Bicycle Users Group and Space For Cycling Brisbane have submitted a concept plan which they say will provide a protected bicycle lane within less than two blocks from every business within the CBD.

The type of lanes they propose to  install are separated from car traffic by small plastic or cement barriers separating cyclists and cars, similar to the lanes that already exist on George Street.

If installed, the bike lanes would bring Brisbane into line with other world cities including New York, London, Paris, and Sydney. In New York, the Department of Transport found that in the streets that had been installed with protected bike lanes, there was a 26% decrease in injuries.

Transport for NSW recently analysed the effectiveness of the bike lanes installed in central Sydney, and found that since the protected lanes were installed, the number of reported injuries had been halved on the sections of road where separated cycle ways existed, even though the number of cyclists using them has doubled.