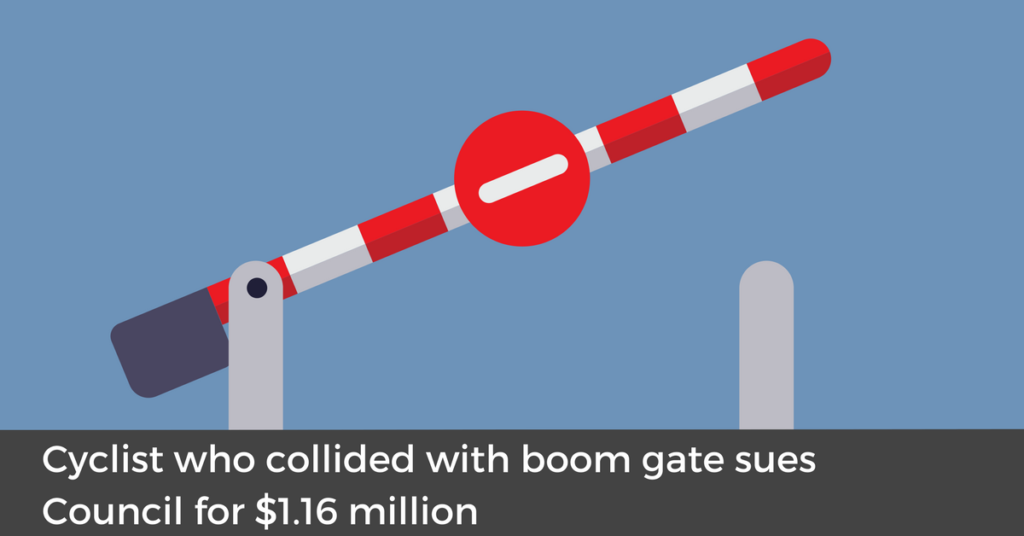 Cyclist who collided with boom gate sues Council for $1.16 million

Champion cyclist Alex Simmons had trained daily on the same stretch of bike route through an open boom gate near the St George Sailing Club.

The cycle route was used frequently by thousands of cyclists and there was an expectation that the boom gate would be open – because it always had been.

Until the morning of 11 April 2007 when someone forgot to open the gate.

Riding about 30km/h, Mr Simmons had no time to brake and smashed into the steel beam of the gate.

The gate was difficult to see and had no signs to alert of an obstruction ahead, meaning the gate essentially came “out of nowhere”.

Tragically, Alex’s injuries were so severe that surgeons were forced to amputate his left leg beneath the knee.

The New South Wales Rockdale City Council had constructed the boom gate to enclose a stretch of road that was adjacent to the sailing club’s car park to stop “hoons doing burnouts”.

Despite the sailing club having an informal agreement with the Council allowing them to lock and unlock the gate at its discretion, the Council had legal authority and control over the boom gate.

To make matters worse, two fellow cyclists had also had a collision with the closed boom gather in similar circumstances. One even alerted the Council to the hazard and was told it was simply a ‘freak accident”.

Mr Simmons brought a claim against the Council, stating they were aware of the hazard and owed Alex and other cyclists a duty of care in ensuring the route was safe. The Court had to consider the 4 critical issues:-

Mr Simmons argued that the gate presented a “perceptual trap”, such that he wasn’t able to detect that the gate was closed in time to avoid the collision.

He said that the Council was aware that cyclists used Riverside Drive often through the entrance to the car park which was closed by the boom gate.

The Council denied that they were liable. They argued that Mr Simmons had alternative options available to him to exit the car park and that Mr Simmons failed to take care for his own safety.

Justice Peter Hall of the Supreme Court did not agree, finding that Mr Simmons “could not, and did not detect the boom gate… until it was too late to avoid it”.

The Court criticised the Council for relying on a lax agreement with the sailing club for the cleaner to open the boom gate daily across one of the city’s most popular cycle routes.

Justice Hall said that “in the event [that] the cleaner failed to attend on any day (for any reason) to open the boom gate, the system carried a foreseeable and an inherent risk of failure”.

Furthermore, it was found that the likelihood of an accident occurring causing serious harm was high as the Council had failed to warn cyclists of a potential obstacle ahead.

However, for Mr Simmons to succeed, he had to overcome a number of evidentiary hurdles.

Evidence had to be collected to prove that the Council owed him a duty of care and that they breached this duty of care.

The Council was held liable and ordered to pay him $1.16 million in compensation

The compensation awarded to Mr Simmons was calculated by reference to the impact the injuries have had on him and the impact they will have on his future earnings and domestic needs.

What does this mean?

Unfortunately, the potential for injury to a cyclist is ever present (whether that be from other road users or public/council hazards).

Recent statistics published by the Royal Society for the Prevention of Accidents in the UK show that about 17% of cyclists sustain serious injuries when involved in an accident. This case sets a great precedent for claims against Councils.

It confirms that Council’s do owe cyclists a duty of care and that if they breach that duty of care they may be liable to compensate the cyclist.