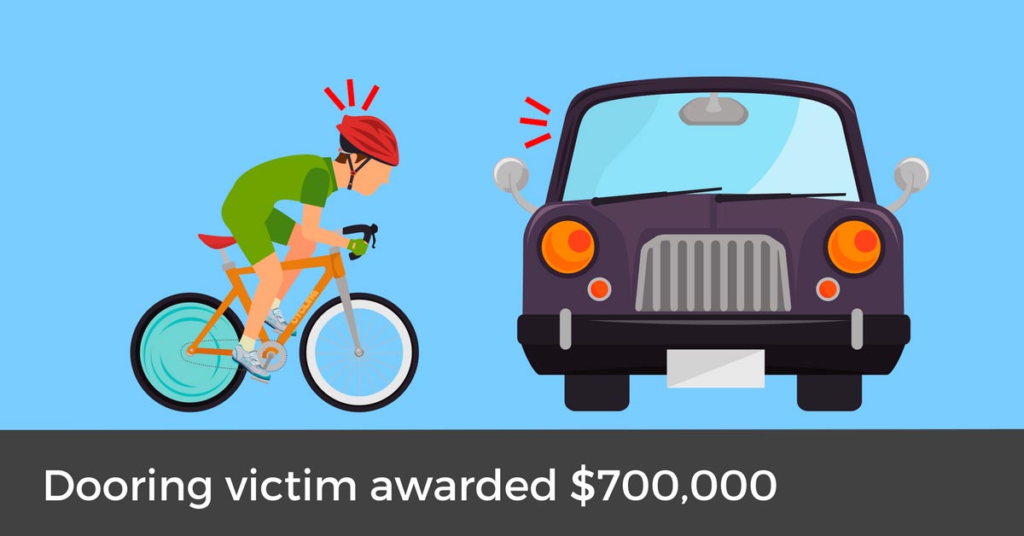 Heather Bolton was cycling along Pittwater Road, Sydney with five of her friends when suddenly she found herself splayed across hard bitumen, in the middle of the road.

She had been the victim of 'dooring’.

Dooring is where a motorist unexpectedly opens a car door into the path of a cyclist, who then slams straight into the door. Cyclists are often thrown off their bike over the door, or onto the road (and into oncoming traffic).

Before this matter went to trial, the driver and the cyclist tried to settle the case privately. Hugh Latham, the driver, admitted that the accident was his fault. After some negotiations, Latham and Bolton agreed that an appropriate amount of compensation for the Bolton’s injuries was $700,000. But Latham argued that that amount should be reduced, saying that Bolton had contributed to the incident.

The Court needed to decide whether the cyclist was responsible for the accident in any way. If she was, she would not receive the full $700,000 she was entitled to. ​According to Latham, he pulled over and parked his white van. The left side wheels were touching the kerb. He checked his right-hand side wing mirror. He saw nothing; no vehicles, no pedestrians and no cyclists. He opened the door about a foot (or 40 centimetres), not wide enough for him to get out. With his hand still on the door, Latham felt the impact of Bolton slamming into the metal.

Bolton claimed she was cycling in the bicycle lane as close to the right-hand side as possible. She had decided this was the safest route. Bolton told the Judge that she remembered noticing the white van parked ahead of her, but she could not recall the collision. A witness claimed that the van's door was opened when Bolton was about 1 metre away.

Bolton agreed that if the door had only been opened about 40 centimetres and she was cycling where she said she was, she would have missed the door. The Judge said that either Bolton was cycling much closer to the van than she admitted, or Latham had opened the door more than 40 centimetres.

To convince the Judge that she was not in the wrong, Bolton gave evidence of her training in safety and the need for vigilance around parked vehicles.

Bolton’s evidence was convincing, and the Judge decided that Latham must have opened the door more than he had admitted and that Bolton had not contributed to the accident in any way.

“The plaintiff was a very impressive witness. She … gave a distinct impression of a person who gave full effect to her safety training,” the Judge said.

​This case shows how important it is to always be vigilant and employ best practises whilst cycling. The Court appears to look fondly upon those who take due care on the roads. Although Bolton was unfortunately injured, she was awarded the entire sum of $700,000 – because she was able to convince the Court that she was a safe cyclist.